The Hong Kong Government is like a regional government to the Chinese government in Beijing. The BIG difference is that the HK Government still uses many British laws and regulations. It has its own judicial independence. 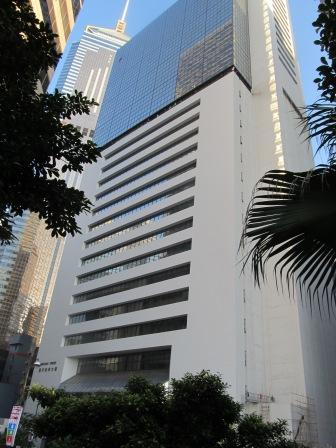 Wanchai Tower, one of the government buildings in Wanchai

It stated in the Basic Law that this system will not be changed for another 50 years since the Handover in 1997. That is the reason why it is called "Hong Kong Special Administrative Region" (HKSAR).

For tourists and travelers, the first HK Government department that you will come across is the Hong Kong Immigration and the Hong Kong Customs.

The staff you see in the Hong Kong Airport may be very serious looking. But, believe it or not, the Hong Kong Immigration department always gets the reward, the most courteous government department.

And it's true. When you go to submit any application in their office, they are always nice and efficient, like any Hong Kong people.

Hong Kong Immigration works independently, such as, the Main-land Chinese can only get into Hong Kong by applying for a visa although Hong Kong is a part of China. Also, because of this, the Hong Kong population increases gradually, instead of drastically.

It has its own regional Hong Kong flag, but not a capital . Government departments are mostly located in Central. In other words, it is somewhat like a capital of Hong Kong.

Hong Kong has its own police force, but not its army. The law enforcement is very clean and efficient. The army is from the PRC government.

1) "The moon shines brighter in other country."

This may describe the attitude of many Hong Kong people towards the Hong Kong government. There are always complaints about what the government did not do and what it should do.

I would never learn my lessons until moving over to the States. The government definitely gives more freedom to people, especially financial freedom.

My mom always says, "How much freedom do you have if you have to pay so much tax to the government that you can't even have your financial freedom?" Big part of it is true.

There is no sales tax in Hong Kong. The income of the Hong Kong government is the income tax at the end of the year and property tax through real estate or property sales. There is no global tax and witholding tax.

You don't need to worry about your medical, vision and dental insurance. If you are ill, you can go to the government hospital. They will take care of you with a very minimal price. Of course, there are people abuse this system that the goverment can only do so much to prevent it.

Of course, nothing is perfect. In my opinion, Hong Kong government is a lot better than any other government in the world.

Some Fun Facts About HK Government

You may think that you will only see the staff of the HK Government if you need to step into any of their offices and see any police officers on duty.

Well....the HK Government not only has its own police force, but also ambulances and fire departments.

Wait till you hear this....if you see any vehicles on the road with the license plate starting with "AM", they are government vehicles.  In essence, the people in there most probably are the government workers.

License plates begin with "AM" has been liked this since the British colonial rule.

On the side note, license plates begin with "A" are ambulances and "F" are for Fire Department.