Hong Kong Airport is one of the top 10 busiest and biggest airports in the world. It is located in Chek Lap Kok in Lantau Island. It was built mostly on the reclaimed land. It was also one of the biggest projects proposed by the British colonial government before the Handover in 1997. 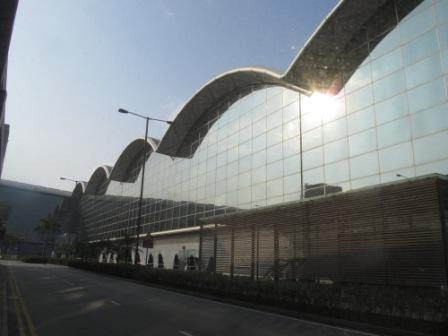 It is commonly called Hong Kong International Airport or Hong Kong Chep lak Kok Airport. It has been in service since 1998.

The old airport was a very unique airport and listed as one of the most dangerous airports in the world with less than 5 major accidents in its history.

The current Hong Kong Airport was one of the "Rose Garden" projects. The colonial government picked the British bidder which was claimed to be the mid-price bidder. I remembered the controversy it caused. Once the news was broken out back then, Hong Kong people were very furious about the government decision and prejudice.

I am very proud to say that it has one of the world's largest passenger terminal building (the largest when opened in 1998). The project is the most expensive airport project ever, according to Guinness World Records. Construction of the Hong Kong Airport was voted as one of the Top 10 construction Achievements of the 20th Century at the ConExpo Conference in 1999. Amazing, huh?

The First Month of Operation

But behind all these achievements, there were road blocks.

The second day after its official operation, there was plumbing problem in the airport. The water supply literally stopped.

When the news broke out, it said that the operation would be back to normal within the next 24 hours. It ended up taking a month.

During that month, the Kai Tak Airport was still under operation as a backup. I was working in a Korean company at that time. One of my job duties was to arrange the import and export of the cargoes. With the active communication with the flight forwaders, that was how I found out the unofficial use of the airport after its official retirement.

Other Infrastructure Along the Hong Kong Airport Project

Airport Express, the extension of MTR, was also part of this project. The great thing about it is that it is literally right in front of the arrival and departure terminals.

For flights going back and forth to North America, the gates are always far away from the Immigration. You must take the airport train. There are only 2 stops which are the one you get on and the one you will get off the train. Very easy.... 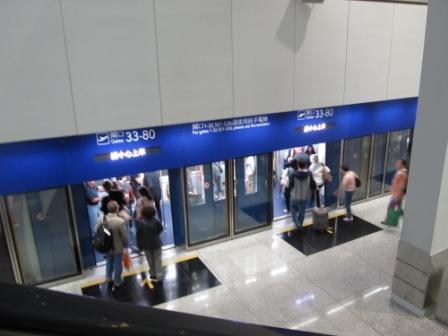 People have Hong Kong Indentity (smart) Card (a.k.a. HKID), like me, can go through the Hong Kong Immigration within 2 minutes. All I need to do is to insert the card into the machine. The first gate will automatically open for me. Then, I put my thumb on a scanner. If it matches the record, the second gate will open. Then, I can proceed to claim my luggage. 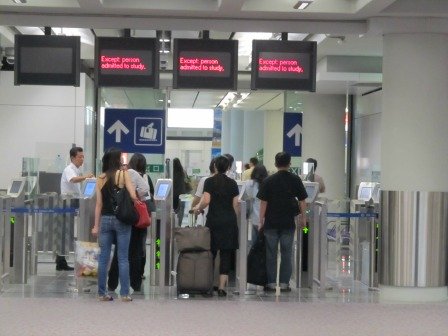 Isn't that cool? You can't get any faster in other countries when it comes to its residence.

For travelers, like Perry and my little one, they need to go through the traditional procedure with the Hong Kong Immigration. Our experience was about 20 minutes. I think it is reasonable.

I did ask Perry at many different occasions if the staff gives him any hard time. As you know when you go through the immigration in other countries, like in the States, everybody is on the mercy of the authority. Perry always tells me the Hong Kong Immigration is very nice to him.

I must admit that even when it comes to its residence, the immigration staff are always nice to me and other people that I saw and/or came across.

As soon as passing the immigration, look up right after the exit. There should be a monitor showing you where you can claim your luggage.

This is the nice part of traveling in Hong Kong begins. If you have any doubt on your face, any Hong Kong airport staff, no matter which department he/she works for, will approach you to offer help. I'm not exaggerating. You can barely find it anywhere in other countries.

There are 13 carousels for luggage claim. It doesn't sound a lot. But Hong Kong people are very efficient. It doesn't take long for you to locate your luggage. 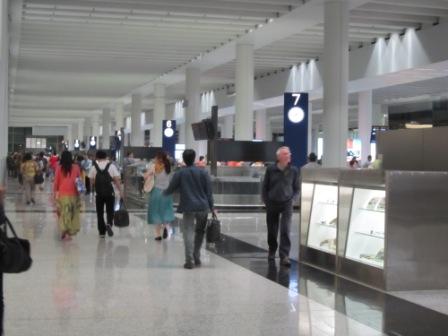 You can pick up a cart to wheel your luggage. The cart is FREE to be used. Unlike any international airport, such as Newark, NY in the States, you need to pay for using their carts to carry your luggage. In the past, I didn't know how to appreciate it. Now, I do and understand the reason why Hong Kong is so successful in its tourism. Everything is traveler-friendly.

After that, you will approach the Hong Kong Customs. Most of the time, they don't stop you and let you keep going, except you look suspicious.

Then, you will come across a branch of Hong Kong Tourism Board and the hotel reservation center of the Hong Kong Hotel Association before stepping your foot into the Hong Kong airport arrival hall. 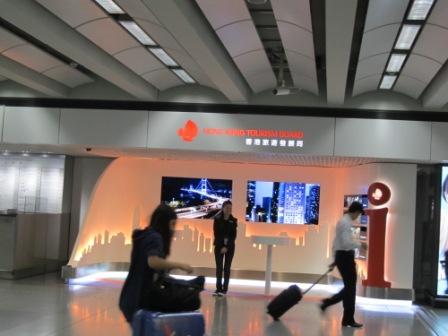 A branch of Hong Kong Tourism Board in the airport 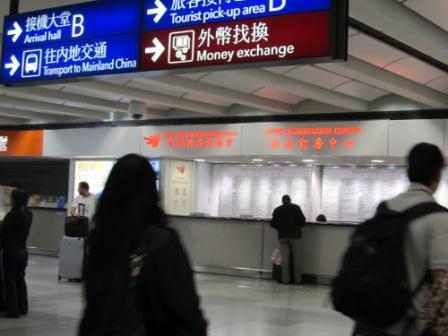 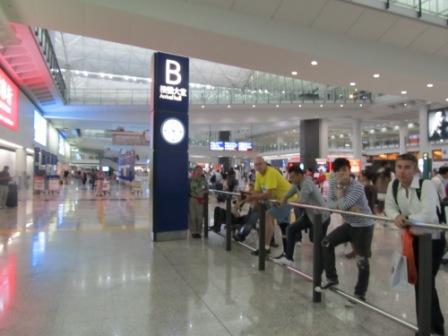 Keep going straight, 5 minutes walk will lead you to the Airport Express station which will take you to the centre of the city. For a first time Hong Kong traveler, it is like a no brainer at all.

Airport Express does link to other MTR routes. But before getting on the train to reach your final destination, you must pay for the Airport Express first which is almost 10 times more than the regular MTR fee. Go to the customer service desk in the arrival hall, somebody will help you.

After getting off the Airport Express, there is FREE shuttle taking you back and forth from the MTR station to most of the hotels.

It may take about 20 minutes of wait for this free shuttle. To take the fastest route, taxi (coming soon - link to Hong Kong Taxi page) would be the way to go. Of course, it is much more expensive.

For most of the flights, travelers must arrive at least 2 hours before taking off to check in and go through the Customs.

Within these 2 hours, you literally have no time to eat or shop in the airport.

I experienced several changes in the Hong Kong Airport when it comes to departure gate. 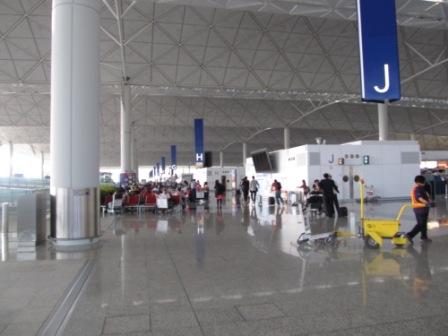 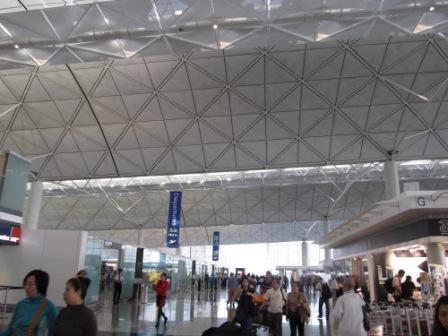 Hong Kong Departure Terminal - The Difference Between Now and Then

1) The glasses to seperate the non-travelers and travelers used to be transparent. You could see the activities inside in the past. A couple years after its operation, they were frosted.

2) It used to have a small lookout area where you could see the landing and the take-off of the flights. It only lasted for, maybe 2 years. There is none right now. To me, this is one of the setbacks.

3) a) In the past, you passed the departure gate and got to the counters of Hong Kong Customs. Nowadays, before stepping behind the gate, there is a staff scanning your boarding pass with a machine. Since we have little children, we have the priority to get into the shorter line which is new to me.

b) Instead of letting the Customs to review your passport, you need to go through the scanning of your carry-on items. Another new line set up for families with children. It lets us go through real quick.

c) Since I have the HKID smart card, I can go through the gates by inserting the card into the machine which is the same procedure as I arrived. Perry used to line up in the long line to wait for his turn. Since we brought along our little one, he had the priority to go through a shorter line for families with children. This is another new set up.

This whole process used to take 20 minutes in the past for us. The last time we went through in Oct 2012, it took less than 10 minutes. Isn't that awesome?

As usual, for any flight flying to America, we need to take the airport train to our gate. Throughout the terminal building, you see many shops and restaurants there. Yes, even the Hong Kong airport is like a shopping mall. If you have plenty of time before boarding, it is very easy to find something to do in the airport. 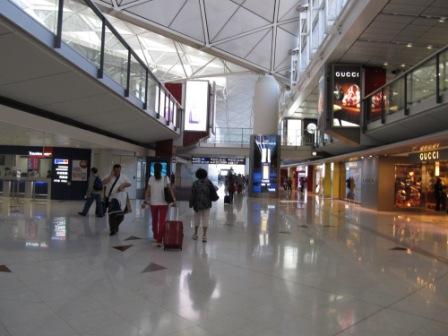 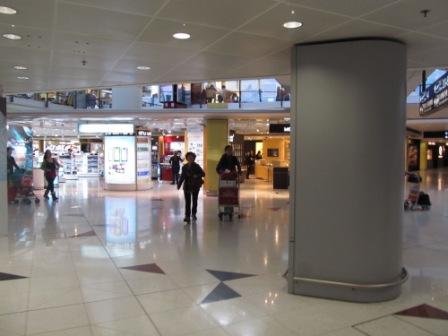 Before boarding, take a seat and look out of the windows to see the landing and taking off the planes.

One...two...three...four...did you realize that there is a plane landing or taking off every minute? Now, you get the idea why Hong Kong Airport is one of the busiest in the world. 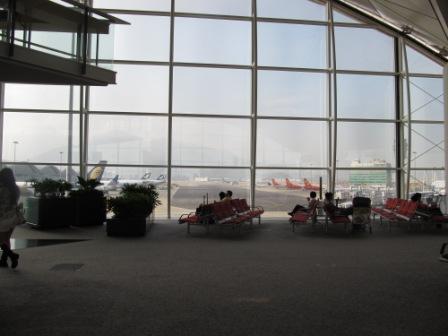 While you are waiting at the boarding area, look out the windows and see if you can keep track how many planes take off and land

Things You MUST Know

ATTENTION: If you plan on buying bottle water to take on the flight, do NOT waste your money. I would suggest you to drink it out of the machine in the airport before boarding. There are machines in the airport providing steriled water for FREE.

Once you board, the Hong Kong Customs will check your carry-on bags again. They will force you to discard all the liquids before you can step on the plane. 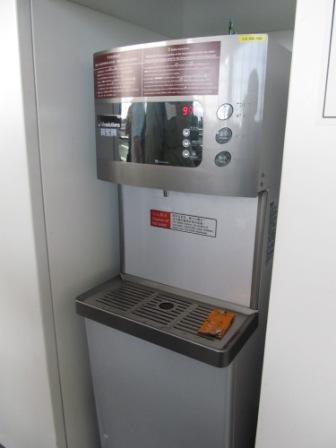 When I was 5-month pregnant in 2009, my doctor advised me to be hydrated throughout the trip. So, I bought 2 bottles of water before boarding. The Hong Kong Customs confiscated all of them. There is NO sign anywhere in the airport to warn you about this. Even when you buy the water in the duty-free stores, nobody would say anything to you either. This is my only complaint about the Hong Kong airport.

Otherwise, it does live up its reputation. It is one of the largest and the most efficient airports in the world.