Hong Kong Lamma Island Tour is mainly for seafood, living in the countryside and the famous wind turbines. 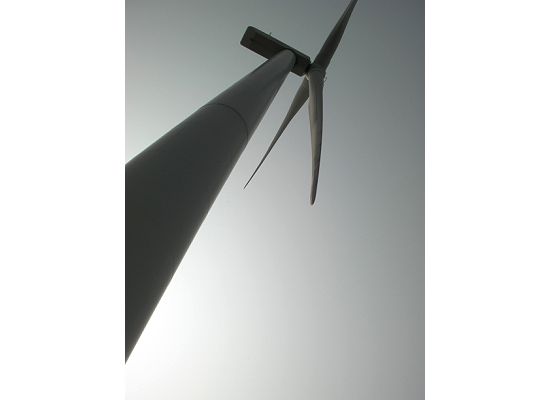 One of the wind turbines in Hong Kong Lamma Island Tour

How did you know about Hong Kong Lamma Island?

Lamma Island became well-known in the world because of the tragedy on the night of Mid-Autumn Festival in 2012.

But please don't let this stop you from checking out this island. It has a special charm here that it is like an escape from the city.

This island is the third largest outlying island in Hong Kong.

Last time I went was Feb 2009. I was 5-months pregnant. One of my younger sisters told us that there was good food and she wanted to check out the wind turbines. The first 3 wind turbines put up in Hong Kong. It's a BIG thing 'cos Hong Kong is so tiny. There is not much land for such big equipment like this.

We got on the ferry around 10-11am in the morning. It took about 45 minutes to arrive from Central to Yung Shue Wan on Hong Kong Lamma Island.

Right after we got off the ferry, we saw 3 big wind turbines on the right hand side on top of the hill. We wanted to have lunch first before doing anything 'cos there would be a lot of walking.

Believe me, you can't take bus, taxi or MTR on the island like in the city. People live here rely on bicycles if not walking. 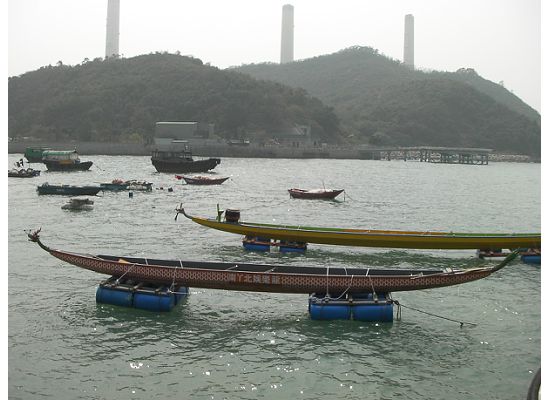 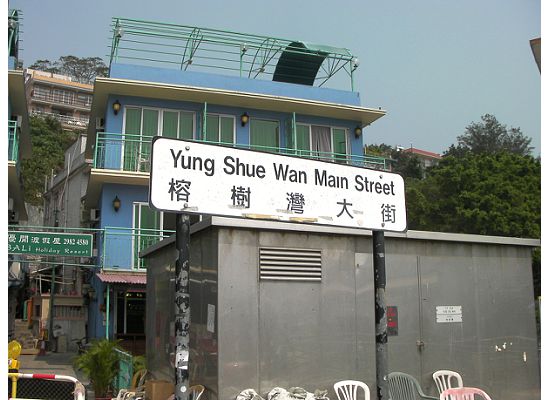 By reading a news article, my sister found a place where she wanted to have lunch.

While walking towards the little cafe (it was so small that it can only sit 15 people max.), we passed by several Chinese seafood restaurants. They have many tanks of seafood in the store front. There are chairs and tables outside under the tents where you can dine if you choose to. If so, you can appreciate a little bit of the view of the island.

After about 10-15 minutes of walk, we arrived at the cafe. It serves a mix of American, Italian and Mediterranean food.

Before heading over to the wind turbines, we walked around in the area nearby the cafe. There are many mom and pop stores, especially for people buying their daily necessities, such as groceries and so forth (that was how Hong Kong used to be before supermarkets came along).

Other Attractions During the Hong Kong Lamma Island Tour

We also checked out some "art and craft" stores which were very similar to the American "antique" shops where they sold items that "they are trash for one, but treasures for the others".

On the same road of all the seafood restaurants, there is a beach over there. But it was winter time in Hong Kong when I visited. So, nobody was swimming. Next to it, there was a tiny Tin Hau Temple. There was nothing after that.

Houses on the Island

We passed by many houses. I can't imagine how people go back and forth to home at night without any transportation. Even with a bicycle, it would be too dark to ride at night. (I guess I'm too spoiled by the convenience of the city life.) Check out these houses and see how different they are compared to those in Hong Kong Island and the Kowloon Peninsula. 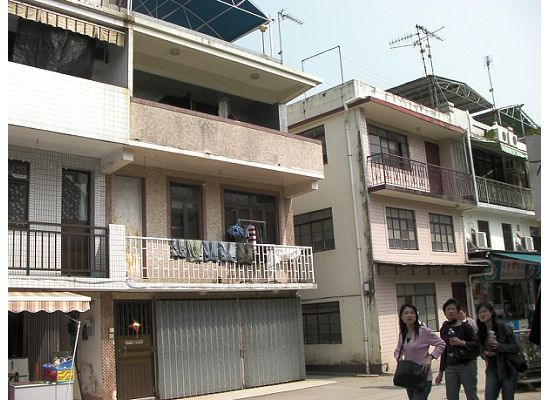 Houses along the street during our Hong Kong Lamma Island tour 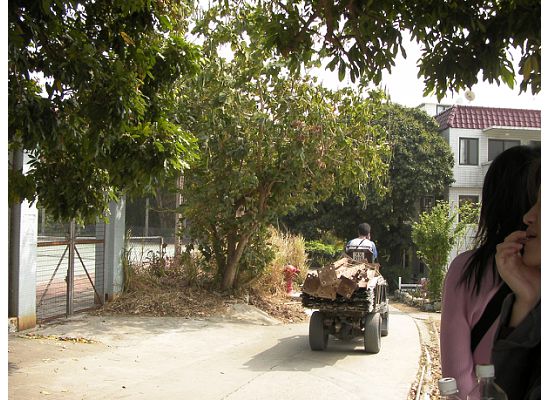 Look at how narrow it is

Journey to the Lamma Wind

In the middle of it, we stopped by a food hawker and had a bowl of sweetened silk tofu (coming soon link to Hong Kong Local Domestic Food page). He had tables and chairs set up under the tent. It was a bit warm that day so it took us a while to finish it.

We followed the sign to Hong Kong Electric Lamma Wind. The path we were walking on went from wide to narrow which is about the width for a golf cart to the width of a bicycle to pass by.

We finally arrived at the bottom of the hill of Lamma Wind. If we can keep walking straight, we could go to the other side of the island.

Instead, we walked up the hill. In the mid-level, there is an organic farm. Next to it, is a tiny restaurant.

Across the road from the restaurant and the farm, there is a lookout where you can see the power plant on Hong Kong Lamma Island tour. 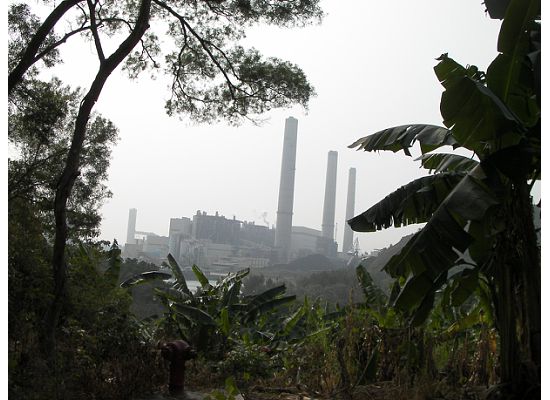 Lookout to the Power Plant

Keep walking....we reached a "Y" where we didn't know where to go. There were no people or anything you can ask where to go. We saw a car passed by (thinking back, I had no idea where that car came from. There was no road wide enough for a car to drive through at the bottom of the hill). We followed our guts and that car which took a right turn.

At first, we thought that we made a big mistake. We got to walk on the slope. It was warm, even though it was Hong Kong's winter time. I was pregnant. It was getting a little bit unbearable. But we found out later that if we took the left turn, it was even worse (I will tell you why later).

The closer you get to the Lamma Wind, the more you can hear the movement of the wind turbine. It was one of the first wind turbines that Hong Kong ever put in. It was also the first eco-friendly electric generation Hong Kong had ever used.

In Hong Kong, the Lamma Wind is just a tourist must. If you had never seen any wind turbine before, you got to come here to see the greatness of nature.

We only had a couple hundred feet away from the Lamma Wind. We saw it already and got so excited. This is just one of them on the island. There are 2 more where they are more difficult to reach.

From the bottom of the hill to here, it took us about 20 minutes of walk. We stayed there for a while and checked it out. 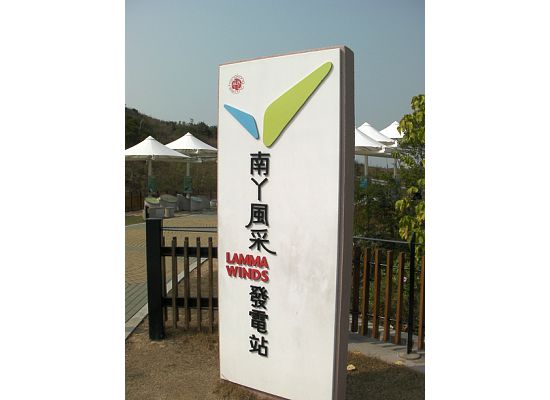 At the same spot (refer to the picture below), you can see the harbor where there was a sign to warn people of the steep slope. If we turned left at the "Y" before, we would come to the Lamma Wind through here. I was so glad that we didn't 'cos the slope was SUPER steep.

This is the steep slope mentioned above. You can see the harbor

Across the Hong Kong Lamma Wind, there is a staircase to go to a gazebo. It is another lookout of the island. 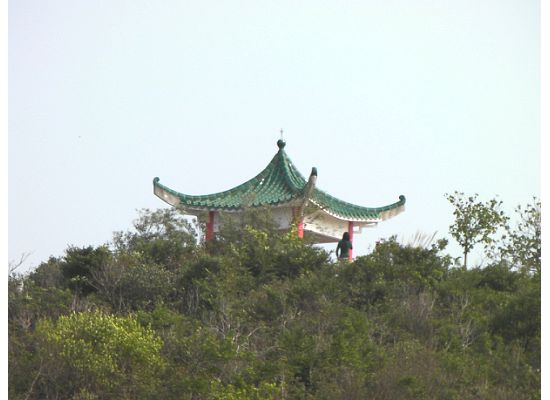 The gazebo across the wind turbine 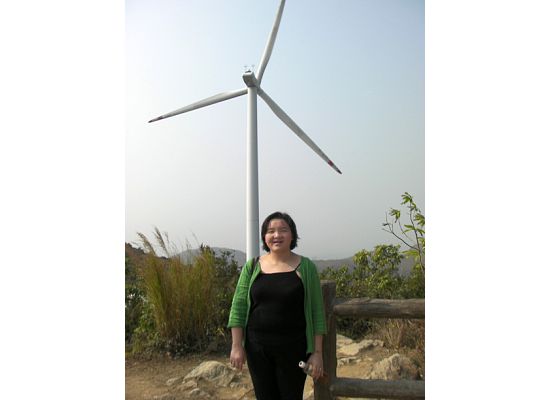 Standing next to the gazebo where I took a picture with the wind turbine. It looks like right behind me and just about the same height as me, huh?

After staying here with the wind turbine moving, you may start to feel a bit chilly.

We didn't travel the rest of the island, but headed back to take the ferry to Hong Kong Island.

In the late 1990s, I had a Hong Kong Lamma Island tour with the company that I worked for on an outing and BBQ. We all walked from Yuen Shue Wan to Sho Ko Wan. It was quite a walk. If you like the countryside, you may like the walk and can check out how different this island is compared to the rest of Hong Kong.

In 2001, when Perry and I were still dating, we walked on that path, too. We even walked up to some steep hills and high staircases. Each step was a foot high. It almost felt like climbing up a gigantic ladder.

Lamma Islanders are more in between the Hong Kong Islanders, villagers in the New Territories and Cheung Chau. It's a bit difficult to put into words. You will feel it when you are there.

Remember: there are no buses or taxis in the Hong Kong Lamma Island tour. Everybody must walk, including the islanders. Please make sure to dress comfortably and layers and check on the weather ahead of time.