Hong Kong history between WWII-1949 this period of time was mainly re-constructing the whole society financially,politically and environmentally.

It was back to the British rule. The picture below was just one of the examples of the destruction done by the Japanese occupation. To see the rock before WWII, go to Hong Kong history before 1842. 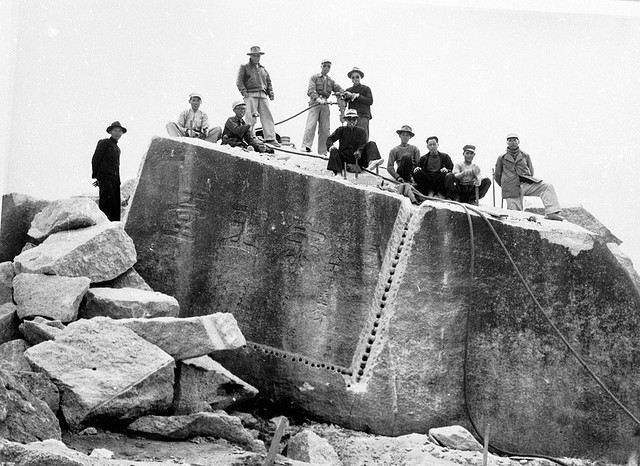 Damage of Sung Wong Toi rock during the Japanese occupation

China was in a civil war right after the World War II.

Many of the richest migrated to Hong Kong. When the communist won the war in 1949 and established the PRC, the Hong Kong population jumped drastically.

My grandparents from my father's side were the eye-witnesses.

My grandfather was in Hong Kong doing business. My grandmother and my father, whom was still a baby, were in Chiu Chau, China. She didn't intend to go to Hong Kong. Due to the civil war, her older brother forced her to get on a boat with my father and go to Hong Kong.

Imagine if they had never gotten on that boat, I would never have existed.

Shanghai was one of the prosperous cities back then. During this period of time, many, many people from Shanghai immigrated to Hong Kong. Most foreign companies moved their offices to Hong Kong. This group of people were professionals, experts and elitists of some fields. Their knowledge and funding contributed a lot to the Hong Kong economic growth later on.

Thanks to this group of immigrants. They provided labor and fund for the prosperity of the plastic, textile and garment industries. Many families survived on them. I recall the stories from my mom about putting the plastic flowers together at home in order to help my grandparents to make the living.