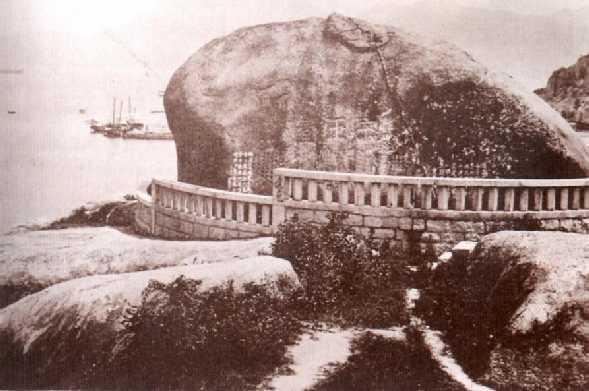 At the end of the Southern Sung dynasty (1127–1279), the last emperor died when a retainer put him on his shoulders and jumped off a cliff following the naval defeat of the Sung Dynasty by the Mongols at the Battle of Yamen. A stone in Sung Wong Toi is the historic relic in the memory of this incident.

To see the picture of the damage of the Japanese of this rock, go to Hong Kong history after WWII-1949.

According to legend, because of his death, it was the reason how Kowloon (meaning "9 Dragons" in Chinese) was named. It said that there were 8 dragons in the area. Emperor was always regarded as the descendent of the dragon. He was the 9th dragon.

Also, the geologist believe that Hong Kong was an extinct volcano millions years ago. Due to the erosion, it separated it into several islands and formed the beautiful Victoria Harbour where you can appreciate it during your ride in the Hong Kong Star Ferry , Christmas and Chinese New Year lighting .

That was also the reason why granite is almost everywhere in Hong Kong.

Before the signing of the Treaty of Nanjing which officially ceased Hong Kong Island to the British, they took the formal possession of this city on Jan 26, 1841 already.

The flag was raised at Possession Point which was originally the mouth of a stream from Victoria Peak .

Although this point disappeared due to land reclamation, there was a time that it was kept as an open space and used for flea market and recreation. We called it "Tai Tat Tei".

It was a BIG open area right in front of the Western Market . It is the location of Shun Tak Centre where you take the hydro-jet to Macau.

During my childhood, "Tai Tat Tei" was a great place to mingle with people. The place was so bright at night just because of the lights from the stalls. It was as bright as a stadium where the crowd is ready for a great ball game.

There were people singing Chinese opera, fortune telling, food stalls that you could even eat fresh seafood, traditional Chinese quiz contest, gadgets and many more.

Throughout Hong Kong history before 1842 till the early British colonial rule, Hong Kong was mainly a fishing port. Aberdeen, a Hong Kong district, still has some fishermen around. If you happen to go to the Jumbo Restaurant, pay attention to the boats around you.

Not until the late Qing dynasty (1644–1911), all southern provinces were treated as uncivilized areas to the Chinese government. Pirates were very active. Cheung Pao Tsai was a very famous one during the Qing dynasty. (coming soon link to Hong Kong Island - Cheung Chau page)

The coming of westerners, Hong Kong and Macau became a major rest area for the fleets before heading north. This gradually brought in the demand of shipbuilding and repairing industries. It was prosperous until 1970s.

On the way to the Hong Kong Museum of Coastal Defence, you still see some of the small shipbuilding and repairing businesses.

Who would think that by studying the Hong Kong history before 1842 could predict this small city became one of the largest financial center in the world?