Hong Kong History 1842-1898 was a very critical period of time. What happened during this period made the Hong Kong of nowadays.

Signing of the Treaty of Nanjing in 1842

The British Rule of the Hong Kong Island

The Qing Chinese government was very weak, corrupt and backwards at this time because of the closed door policy. Westerners were desperate to open up this market, especially the British tried to make up the deficit of the tea trade. So, they sold opium to the Chinese.

Other than the opium, there were many causes to lead to the war. If you study the history of that time, there were things that both Chinese and British did very barbarian.

Anyway, the Chinese lost the First Opium War and signed the very first unequal treaty, the Treaty of Nanjing in 1842. The Hong Kong Island was ceased to Britain. 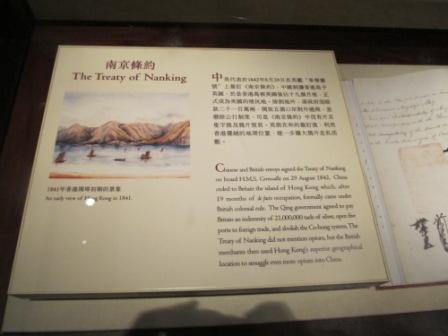 Treaty of Nanjing (1842) - This picture was taken in the Hong Kong Museum of History.  You can find out more pictures in our Facebook page.

After the loss of the Second Opium War, the Treaty of Beijing was signed in 1860. Kowloon Peninsula (the south of Boundary Street) was ceased to Britain.

The Second Treaty of Beijing was signed in 1898. Kowloon Peninsula (north of Boundary Street) and the New Territories was leased to Britain for 99 years which would be 1997.

That's the reason why Hong Kong was handed back over to China in 1997.

To check out the district where the British first settled, you can take a tram ride going to the Western District. While you are there, take the advantage of this opportunity to check out one of the historical monuments, the Western Market. Also, you will pass by a place great for Hong Kong seal stone shopping.