Hong Kong Taxi
The Most Convenient,
But Expensive Way To
Get Around in the City

Hong Kong taxi can definitely bring you anywhere in the city where other transportation can't, especially if you are not very familiar with this city.

The purpose of this page is to help you to pay attention to some of the special features of the Hong Kong taxi in order to avoid any evil trap of a SMALL group of bad taxi drivers.

I got to say that bad people are everywhere. The best you can do is to be more knowledgeable and keep your eyes open to protect yourselves.

So, please don't let this group of people to bear the bad impression of Hong Kong on you.

I bet you see red the most. Red taxis run in the Hong Kong Island and the Kowloon Peninsula.

Hong Kong red taxis literally can run throughout Hong Kong, including where the territories where the green and blue taxis run.

But here is the rule how it is set up. For instance, someone wants to go to Lau Fau Shan (coming soon - link to Hong Kong Seafood page) in the New Territories from Tsim Sha Tsui in the Kowloon Peninsula. Does that mean he/she has to switch from red to green taxi on the way?

But this rule only applies to the red taxis, not the other 2. Throughout my life in Hong Kong and the trips going back to visit, I had never ever seen a green or blue taxi in the Hong Kong Island or the Kowloon Peninsula. 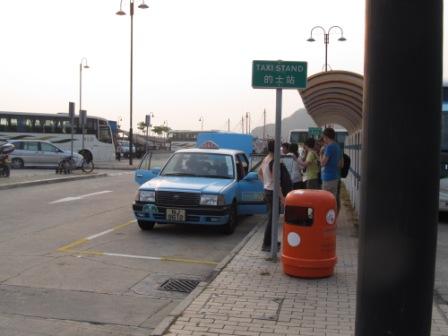 Hong Kong Lantau Island taxi is blue in color.  You may rarely see it.  Even if you are in the airport, the Giant Buddha or Ngong Ping 360, you may see more red taxis than the blue ones.

Hong Kong taxi charges its fare by the meter. As soon as you get on a taxi, there is a minimum charge. As of October 2012, the red taxi charges HKD20 for the first 2 km. The other 2 taxis charge just a couple bucks less.

Then, the meter will increase for every 200 meter or a minute if the vehicle is at stand still position, such as waiting per the customer request or traffic congestion.

Taxi driver rarely negotiates for a fixed price. It sometimes happens when you call the taxi company to reserve one going to the airport and the trip is not during the peak hours. Then, they are willing to negotiate.

In this case, you offer the price and the taxi driver may do the counter offer until both parties reach to an agreement. Like I said, it is not common.

On that note, if a taxi driver approaches you to go somewhere with a fixed price, ignore him.

When you need to put something in the trunk, you will get charge for the number of bags or luggage. As of February 2013, each bag is HKD5.

In addition, taking taxi to the Hong Kong Airport or across the harbour, all taxi drivers charge for going through the tunnels and/or Tsing Ma Bridge both ways. For example, the total fare of all the tunnels is HKD50. They will charge you HKD100 instead.

The reason behind is that they consider they will drive back to their own territory without having a customer on the way back. This is a common practice and non-negotiable.

There is an exception, when the drivers are changing shift. For example, you are in Kowloon Peninsula and want to head back to the Hong Kong Island, so as a taxi driver because of changing shift.

First, the driver will ask you if you are heading to the way as his before letting you to get into the vehicle. Then, the tunnel fare will only charge for one-way. 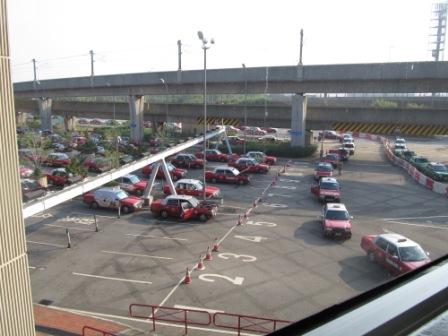 These taxis are waiting for their customers at the Hong Kong International Airport.  See the right corner, there is a line of green taxis for going to the New Territories.  The red ones definitely dominate the market

All taxi drivers have their identity card in the vehicle. It is always sitting on top of the dashboard. It always consists of the driver's name in both Chinese and English and the license plate number.

It is big enough for you to read from the backseat. On the safe side for tourists, write down this information first thing when you get into the taxi.

Do NOT be afraid to ask the taxi driver if, for any reason, this identity card is blocked from view.

Most taxi drivers are good, especially what I learned from my grandfather from my mother's side. He always holds the dearest part of my heart.

He worked as a taxi driver for half of his life. I heard a lot of stories of how he helped people that he happened to pick up during his career.

So, don't let that small group of bad ones scare you away.

Check out this website for an taxi fare estimate. Remember this is an estimate which does not consider traffic congestion or alternate routes to your final destination. But this is a great way to find out the cost.

Although taxi is the most expensive way to get around in the city, it does provide you the most convenient way to your destination.