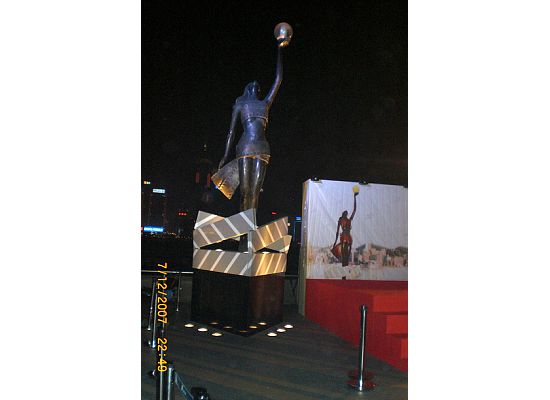 As you may know, people living in the city usually do not have much patience. Everything has to be quick 'cos every second means money. The quicker, the better. So, is HK movie production.

Growing up with the Hong Kong action movies, I never realized until lately that the style is so imprinted in my brain. I was watching the Transporter

one Friday night. I had never watched it before. As soon as I saw Jason Statham started to fight with his enemies in the film, I said, "The fight director must be from Hong Kong." As soon as I saw Shu Qi showed up, it confirmed half of my wild guess.

I don't watch HK movies as much as I used to. Part of it is the quality of the story lines. Sometimes, they are just a copycat of some foreign movies.

But when it comes to movies based on any Chinese classical novels, books and/or orchestras. I definitely watch them or rent them although movie renting in Hong Kong had long been gone from the business.  People prefer to buy a set of DVD or go online to download.

If you are a movie theater goer, you will love those in Hong Kong. Most of them are clean and with very nice setting and comfortable chairs. Tuesday nights are normally a discount night.

Plus, Hong Kong people are very cooperative in the theaters. Once the movie starts, the theater is dead quiet. All cell phones are off. You rarely find anyone talking to each other or on the cell phones.

All Hong Kong movies have Chinese and English transcriptions. So, if you don't understand, speak or write Chinese, you can still watch the HK movies without worrying about understanding it. For English movies, there are always Chinese transcriptions.

Since Hong Kong is the hub of East Meets West, there are movie theaters that show movies of other languages such as Spanish, Italian and so forth. And typically these are the movies that have great story lines and have received many awards.

Please note that the ticket prices do not have any big difference between theaters. You can also purchase tickets online which will allow you to pick your seats.

Here are some recommended movie theaters:

This is the biggest chain theater company in Hong Kong. They have a theater in almost every major mall, such as the Times Square Mall .

They have very good sound equipment in their theaters. You will love it.

It is another big one. They have cinemas in the Pacific Place Mall and the Festival Walk Mall.

They also have good sound equipment in their theaters.

They have theaters in the mid-grade malls. The size of the theaters is comparatively smaller. But the sound equipment quality is good.

The one in JP Cinema is better, in my opinion.

It is about the same as MCL cinemas.

This is an alternative cinema literally right across Eaton Hotel in Kowloon. My sister and I used to watch some European movies here. Many of them got awards in Europe and/or America.

Some of the movies are not in English. So, you will see both Chinese and English transcriptions.

There are many Hollywood movies filmed in Hong Kong.  Share with us your favorite ones: